Important notice: For up to date information about the pandemic visit www.sacoronavirus.co.za.

Review of Clivia Groups and Mutations

Very often one gets asked the question, “what should I pollinate this with?” This is a complex question which depends on the outcome wanted. However, in most instances the reasoning behind pollination is to reproduce the plant that one already has. Luckily when one works with colour mutations this is not a difficult thing to do if one knows which group one’s plant belongs to and which other plants belong to that same group.

For this reason, we have been asked to update a listing that has been available from the Clivia Forum days. We have done so based on information available to us at this stage and we are sure that there are many other plants that could be included and some that might even be moved to other groups in future.

What is a compatibility group?

A group of plants is accepted as plants that are compatible with each other genetically.

Compatibility for this purpose is defined in terms of colour breeding with Clivia as two plants that will, when crossed with one another, give seedlings with a similar colour flower to that of the parents because of genetic compatibility of the colour mutation they both share.

Grouping plants in accordance within the below mentioned “Grouping” system can aid one in coming to a predetermined conclusion of what can be expected when breeding between two known compatible plants.

It is important to understand that not all Clivia fall into the groups listed below. Orange for example is the standard default colour of a Clivia and as such is not a mutation like the colour mutations listed below so it does not fall into a group. Within oranges we do however find colour patterns.

A good example of colour patterns would be the Chiffon type plants, generally large throated orange flowers or White Lips/Ghost flowers where parts of the petal colour is washed out giving a “ghosted” pattern. When breeding with these plants the outcome cannot be guaranteed however a percentage of similar results are expected as opposed to mutations where one expects 100% similar results when two plants from the same mutation is crossed. In this article we are focusing on genetic mutation groupings rather than colour patterns.

Methods used to test a group

There is only one fool proof method of testing which group a Clivia miniata belongs to and that is to pollinate it with known groups and checking the results. In some mutations you will be able to tell compatibility on the pigmentation of the seedlings already where in others you will have to wait until the seedlings flower to be able to tell.

Colour bleeding on the flowers when damaged or on the berry as it ages, leaf and leaf tip shape are not good indicators of which group a plant belongs to.

A split can be defined as a plant that came about by crossing a plant from one mutation with a non-mutational plant or with a plant from a different mutation group thus resulting in a plant that is orange flowering. This plant will now be carrying 50% of the genetic mutation of the original parent/parents.

These orange splits often result because of ignorance, wrong information, misunderstanding of the grouping system, mislabelling or intentionally to improve certain traits such as flower size, flower count or flower shape, being aimed at second generation results. By breeding a split plant back to its parents’ mutation one can retrieve a percentage of plants with that mutation with hopefully some of the better traits from the other parent involved in the original cross.

Strain or Series of plants.

A lot of the plants available for sale these days are strains of plants that have been developed from mutations by crossing two plants of the same mutation together or selfing a particular plant with a colour mutation, the reason for this is that it is much easier reproducing colour with a mutation. Although the plants in a strain all have the same name, no two plants are 100% identical. Good examples of these include Pretty Pinks, Hirao, Tipperary Peach and 777.

The plants in a strain may not be identical in looks, however they look similar in colour to the rest of the plants in the strain and they will all fall into the same group and will be compatible with each other. When outcrosses are done either within or outside the strain, the resulting seedlings are no longer part of that particular strain of plants.

From our combined years of breeding results as well as knowledge gained from other Clivia growers across the globe, we have put together the following listings. The list has been simplified to include Clivia miniata plants and hybrids that are commonly available.

The terms Group 1 and Group 2 were originally intended to be used only for yellows – however over the years some peach coloured Clivia have been found that are “compatible” with either Group 1 or Group 2 yellows. They give unpigmented seedlings when crossed with yellows from the same group resulting in seedlings with varying shades of yellow and peach. For simplification these peaches have been included in a subcategory with the group of yellows that they are compatible with. 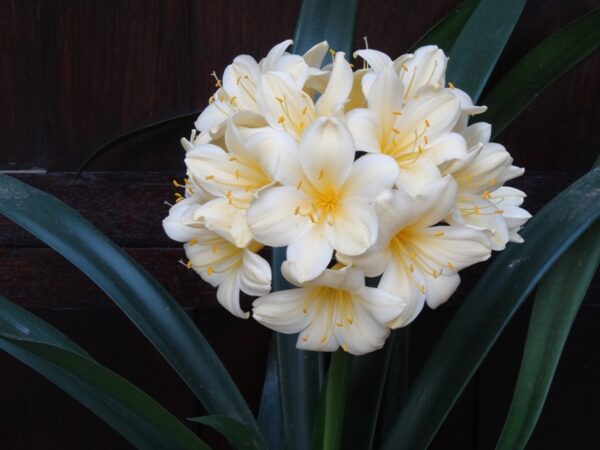 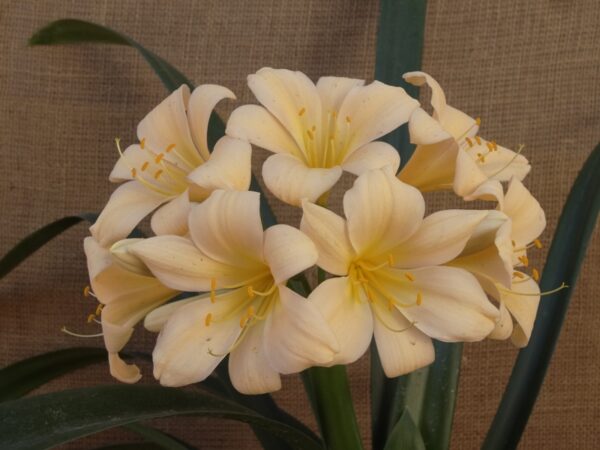 The majority of yellow Clivia miniata fall into this group. Flowers are yellow, produce yellow berries and seedlings from crosses within the same group are unpigmented when germinated. 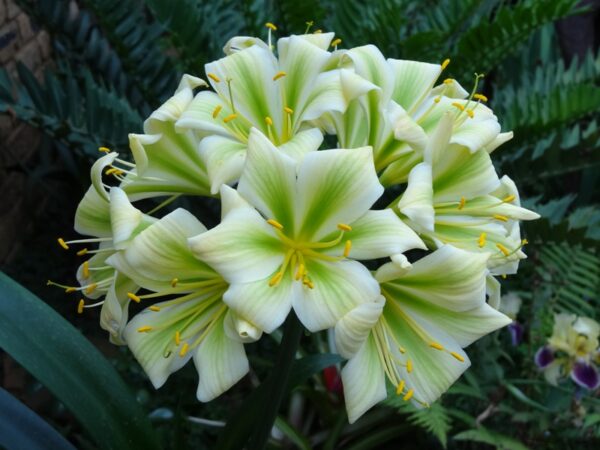 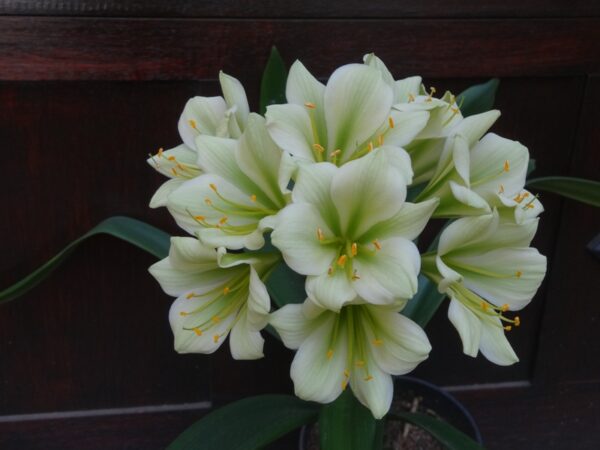 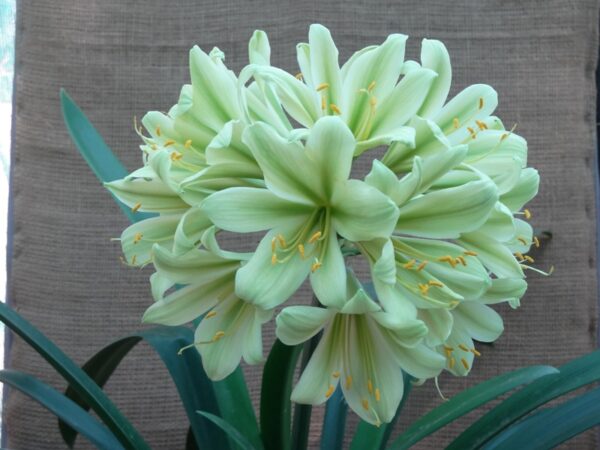 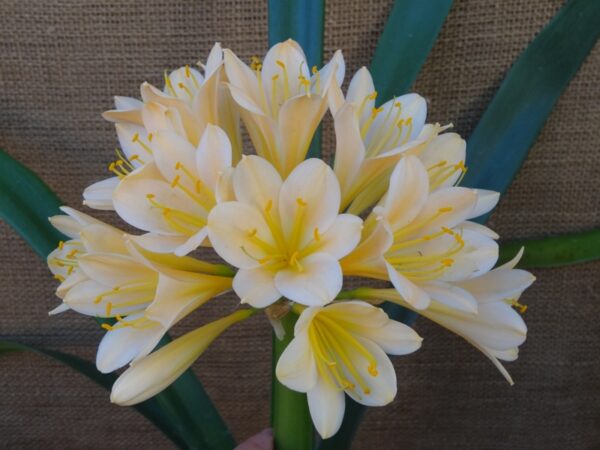 The plants flower yellow, produce yellow berries and seedlings from crosses within the same group are unpigmented when germinated.

Flowers are peach in colour and seedlings from crosses within the same group are unpigmented when germinated.

Plants flower yellow with a pink colouration as the flowers mature, berries are red and seedlings from crosses within the same group are pigmented when germinated. 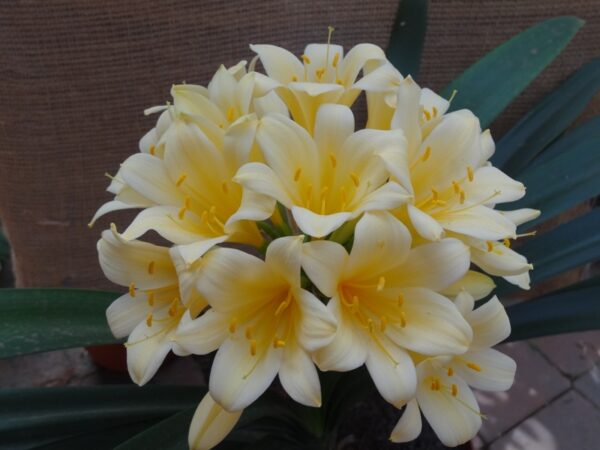 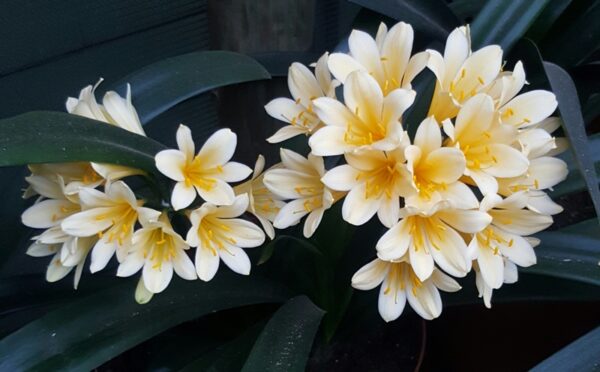 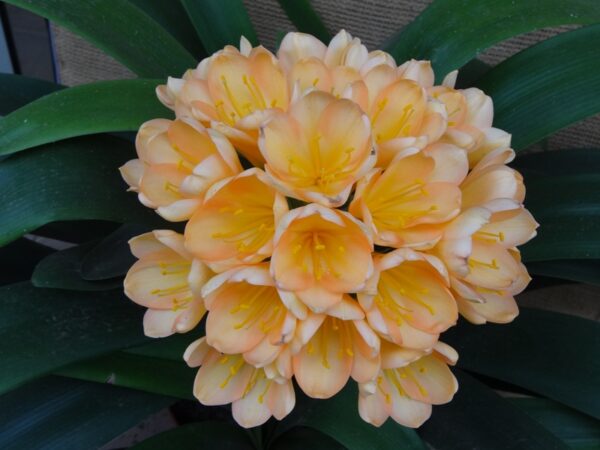 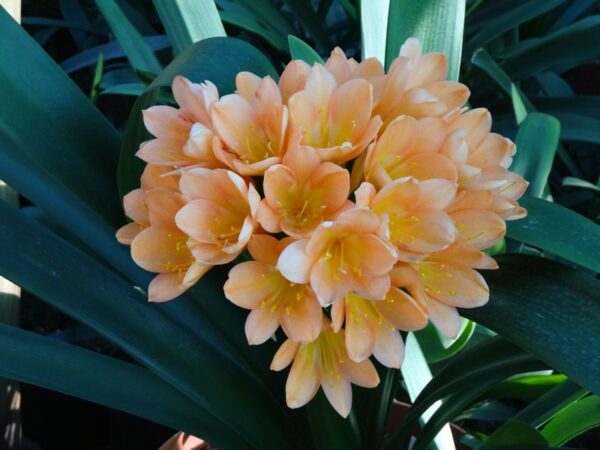 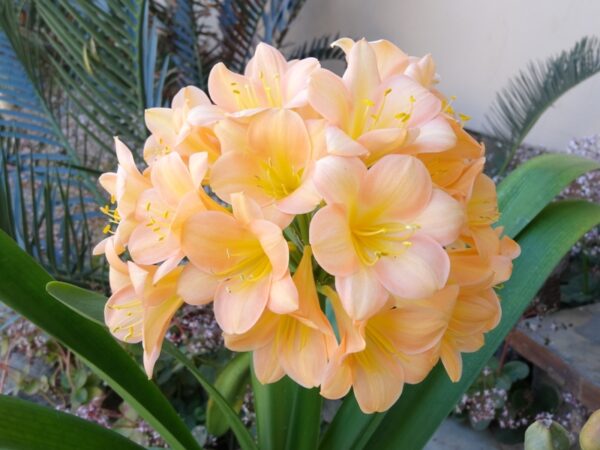 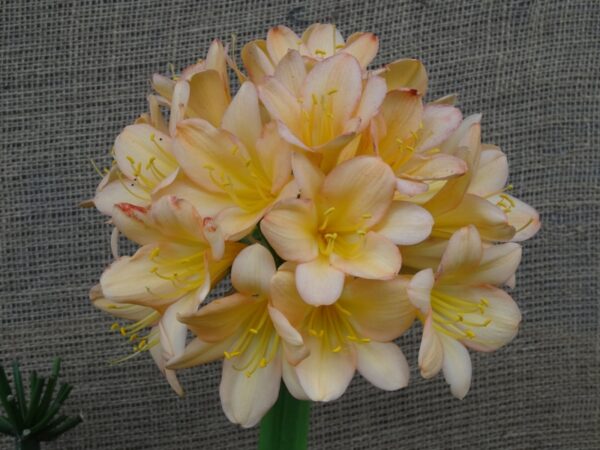 Flowers in the group are various shades of peach / pink, seedlings are unpigmented when germinated (Tipperary and Cameron will occasionally have pigmented seedlings which flower peach in colour) 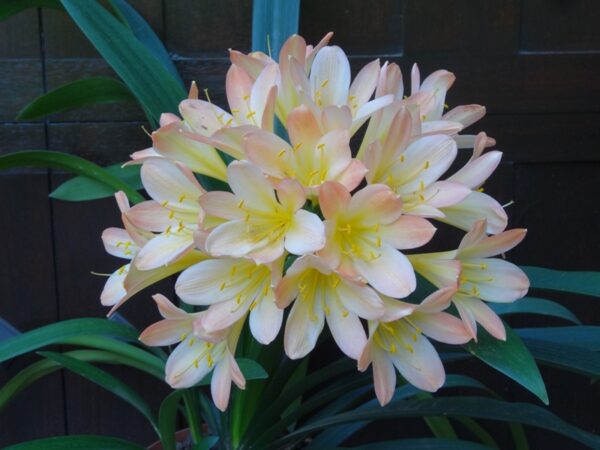 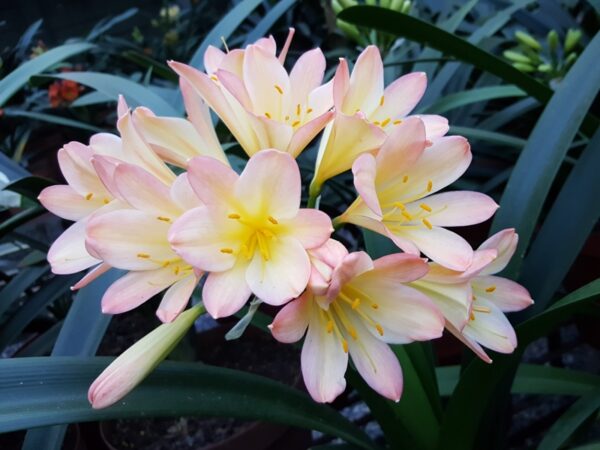 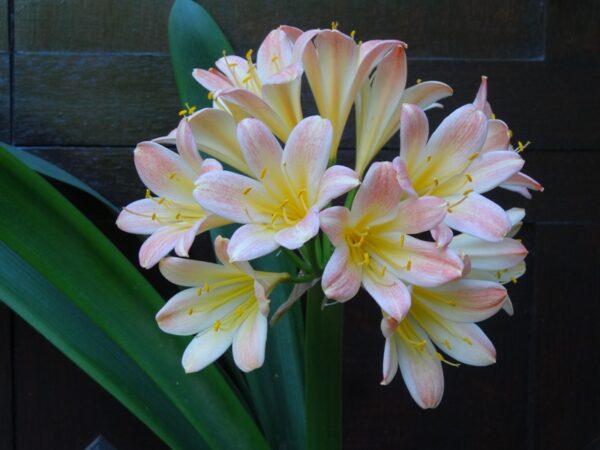 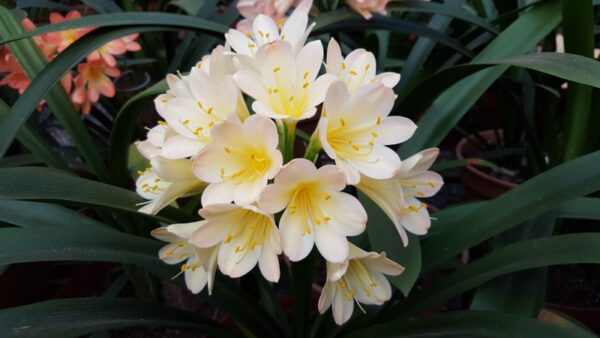 Flowers are generally white infused with pink towards the tips and seedlings from crosses within the same group are pigmented when germinated. 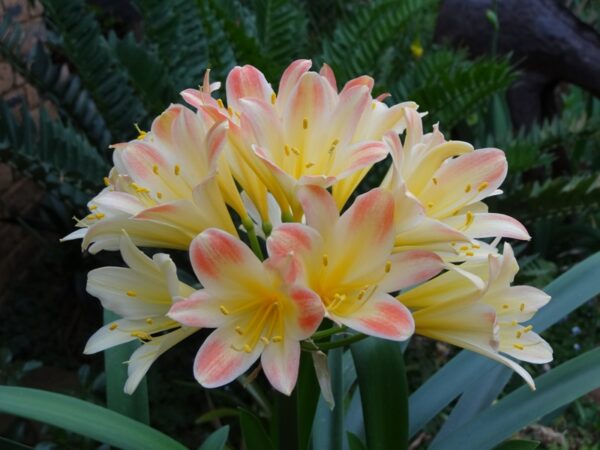 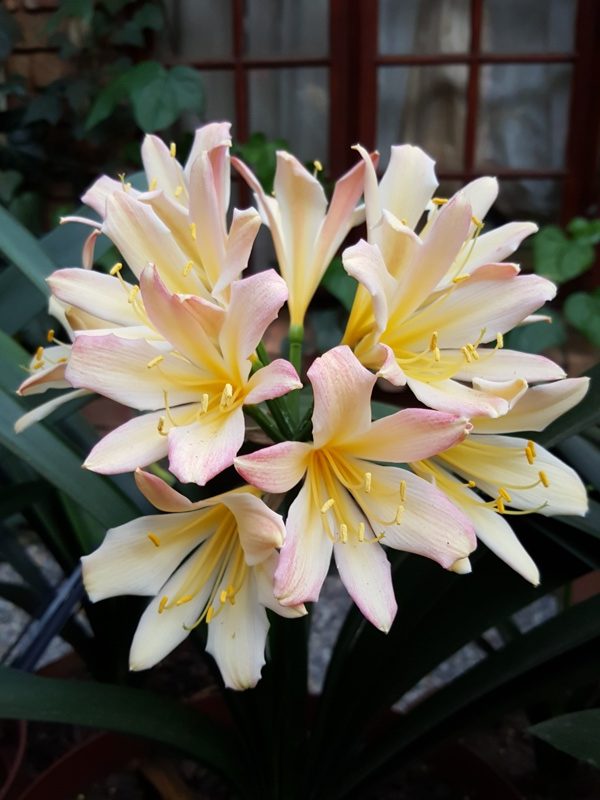 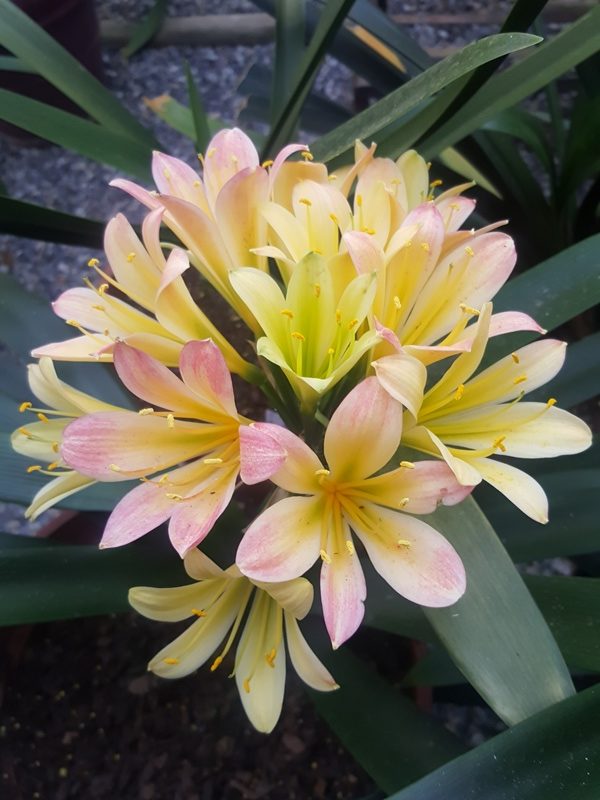 Flowers are light yellow or white infused with pink that bleeds to a darker shade of pink to hints of mauve as the flowers age, unpigmented seedlings when crossed within the same group. 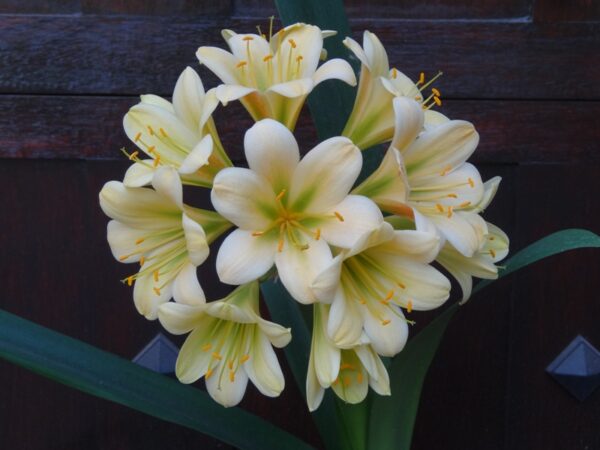 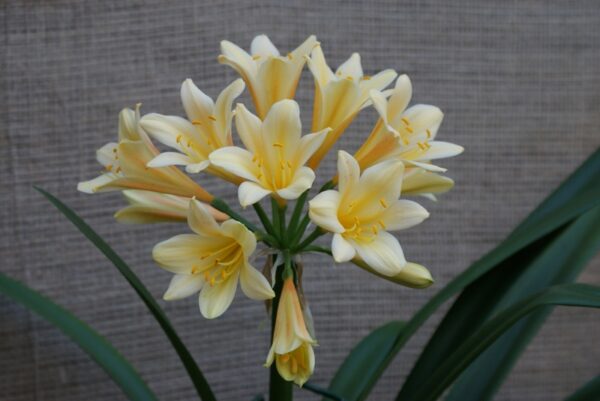 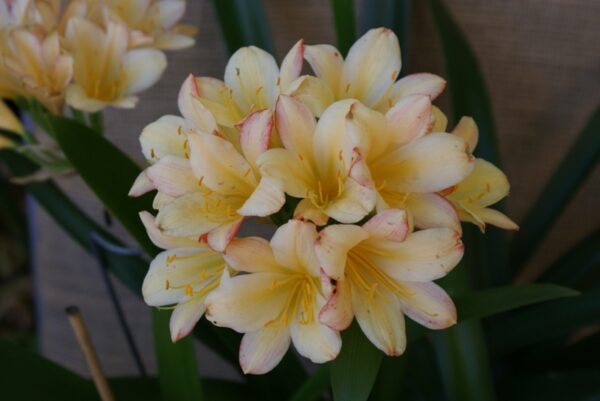 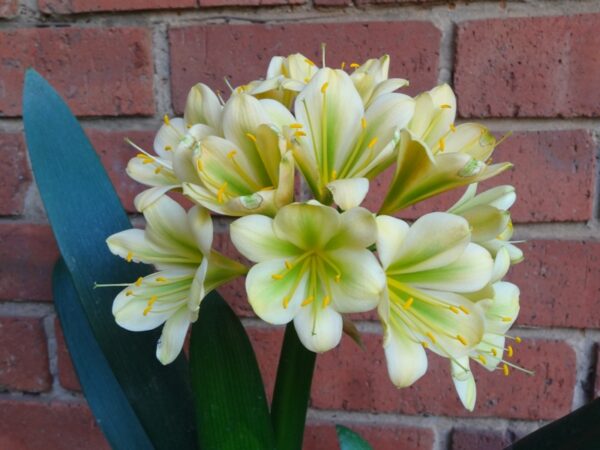 Flowers are generally yellow in colour with a pronounced red colouration on the back of the petals, seedlings from crosses within the same group are unpigmented when germinated.

It is of great importance when using the above mentioned method of breeding compatible mutation plants with one another, that one knows ones plants, if there is doubt on where in the above mentioned groups a plant falls, take the time and effort to first to do experimental crosses in order to determine without a doubt in what mutational group a plant falls as to not find out a year later after using its pollen on several plants that the plant might not in fact be what it was suspected of being. Similarly it is of the utmost importance to properly label ones plants, as well as listing their compatibility group to limit the chance of mistakes occurring.

Colour mutation breeding is certainly one of the most valued methods available to Clivia breeders, not only can one guarantee the expected result by working with plants in the same group, it is also an invaluable method of increasing numbers of a desired mutational colour, and much faster than following the method of out crossing, where it can take several generations to achieve the desired results. Also when one knows where in the above grouping system a plant falls, it makes it so much easier to select other compatible plants for hybridising in order to improve desired traits.

Lastly one cannot write an article on colour breeding and group compatibility without giving mention the late Wessel Lotter, his son Rudo Lotter , Bill Morris and Sean Chubb who started paving the way for what we know today about Clivia Groups and Compatibility.